Britain takes pride in its global aspirations. Yet outsiders could be forgiven for thinking that the UK’s domestic politics are those of a banana republic.

After a test of confidence in which the Tory Prime Minister Boris Johnson won 59 per cent of the votes of Tory MPs, the headlines portrayed him as a lost cause in spite of a parliamentary majority of around 75, the largest since 1987. 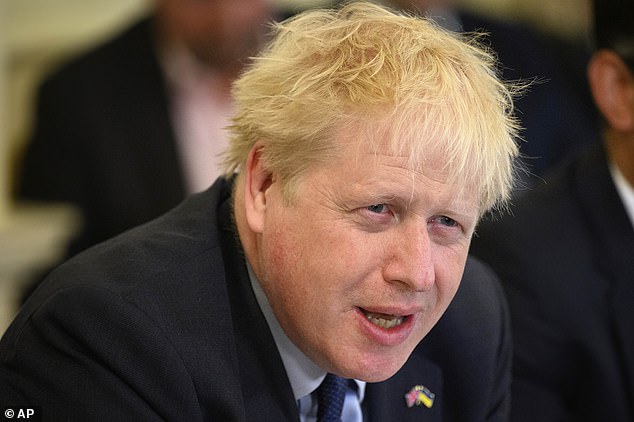 Beleaguered: After a test of confidence in which Boris Johnson won 59% of the votes of Tory MPs, the headlines portrayed him as a lost cause in spite of a parliamentary majority of 75

Partygate has immensely damaged the Prime Minister’s credibility. But the notion that his Government is uniquely responsible for the cost of living surge, the pound’s fall and the deterioration in Britain’s trade balance is hooey.

New forecasts released by the World Bank show an international economy badly damaged by the aftermath of Covid-19 and the Ukraine war. Images of Ukrainian grain ships, headed for Africa, blockaded in Odesa by Russia, point to the crisis for humanity.

The under- fire president David Malpass, accused of not being green enough, wants changes in fiscal, monetary, climate and debt policies to counter inequality.

In a study comparing the stagflation of the 1970s with today, the World Bank notes that the medicine administered by the late Paul Volcker, namely steep increases in interest rates, triggered financial crises in emerging markets and developing countries.

As central banks tighten policy, with the Federal Reserve threatening to be the most aggressive, no one should be surprised that sterling has suffered. Its weakness is a dollar event caused by the US currency’s safe-haven status and higher returns on US bonds.

Opposition parties in the UK may not like the timing of Rishi Sunak’s £ 15billion bailout for the hardest pressed families, arguing it was contrived to strengthen Johnson’s standing. But it was necessary to take the sting out of soaring energy bills.

Britain, other Western nations and much of the developing world are all in the same sinking ship and searching for life buoys.

As a former member of the British army, Simon Moore, who is taking command at mutual insurer LV, should know his first duty. It should be to send chief executive Major Mark Hartigan to the guard room and issue marching orders.

Hartigan is praised by Moore’s interim predecessor as chairman, Seamus Creedon, for keeping the show on the road in tumultuous times. The mutual insurer continues to attract new business, winning £ 1.6billion in 2021.

What Hartigan’s admirers should acknowledge is that it is precisely because LV is a mutual that it enjoys the support of independent financial advisers.

Under mutual ownership, policyholders can have a genuine say as demonstrated when they derailed the effort to sell the company to private equity.

If LV had been swallowed by Bain Capital the cash reserves it garnered from selling off its general insurance arm might have disappeared into the black box which is private equity.

Moore comes to LV from the relative obscurity of Cambridge & Counties Bank, owned by Trinity Hall, and a local authority pension fund, which has some characteristics of mutual ownership.

He does not appear to have the baggage of his permanent predecessor Alan Cook who was managing director of the Post Office during its darkest days. Instead of standing up for LV members, Cook took Hartigan’s side until the insurer was forced to do a reverse ferret.

The new chairman should claw back Hartigan’s £ 511,000 bonus for 2021 and order an independent probe into the zig-zags which disgraced a 179-year-old mutual.

Here is a great idea for chief executive Rachel Osborne and the Ted Baker board.

Instead of trying to flog off one of the few UK funky fashion brands to have crossed the Atlantic successfully, why not restore the pizazz and rebuild the magic?

If Osborne can’t do it, bring in someone who knows how. That is how the remaking of raincoat maker Burberry as the UK’s luxury champion began.