TikTok users regularly complain of hours lost on the platform, thanks to the video app’s unmatched ability to distract, entertain and engage users by way of its advanced recommendation technology. Its addictive nature has been the subject of numerous psychological studies and parents’ concerns, as TikTok becomes one of the most-used apps among children. In lieu of dialing back its digital dopamine dispenser, TikTok is today rolling out a new set of screen time features designed to put users in better control of their TikTok usage.

Among the new features are two new controls for monitoring and managing screen time usage, as well as a new digital well-being guide that’s being added to the app’s Safety Center.

The guide, titled “How can I reflect on my digital well-being with my family and friends?” is meant to help users “reflect more holistically” about how they spend time online, TikTok said.

The new screen time features, meanwhile, are in addition to the screen time controls TikTok already launched for families, which have been available globally for over two years and include a way for parents to set screen time limits for children. The features are also supplemental to the daily screen time limits tool TikTok added in February 2020, which is available to all users from the app’s existing Digital Wellbeing section.

Instead, the newly launched in-app tool arriving today helps users control how much time they spend on TikTok in a single sitting by allowing them to schedule regular screen time breaks.

The feature aims to address app addiction issues that aren’t related to total consumption, but to losing track of how long you’re spending on TikTok each time you open the app. In other words, it’s a tool for managing screen time on a per-session basis. 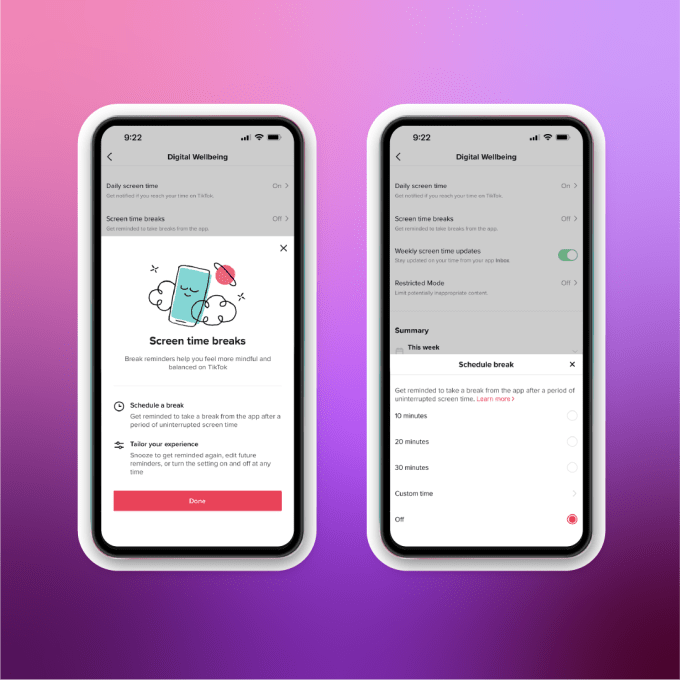 With the new tool, users can ask the app to remind them to take a break after a certain amount of time of their choosing.

By default, it suggests break reminders of either 10, 20, or 30 minutes, though users can set reminders for a custom time if they wanted to engage in either longer or shorter sessions before being shown the notification. These default suggested times for session breaks are much reduced from the daily screen time limits the existing tool recommends. The latter asks users to set a daily screen time limit of 40, 60, 90 or 120 minutes.

TikTok notes the tool can also be snoozed or switched off at any time, which would allow people to use reminders as they saw fit. For instance, users may not want to limit screen time on a lazy weekend at home, but would want to limit their TikTok time during the work week when they’re trying to get to bed early.

Related to this addition, TikTok is rolling out a new screen time dashboard that will provide more information about how much time users are spending on the app. It includes summaries of the user’s daily time spent on the app, the number of times they opened the app, and a breakdown of daytime and nighttime usage. Users can also opt in to receive weekly notifications that remind them to review their dashboard. 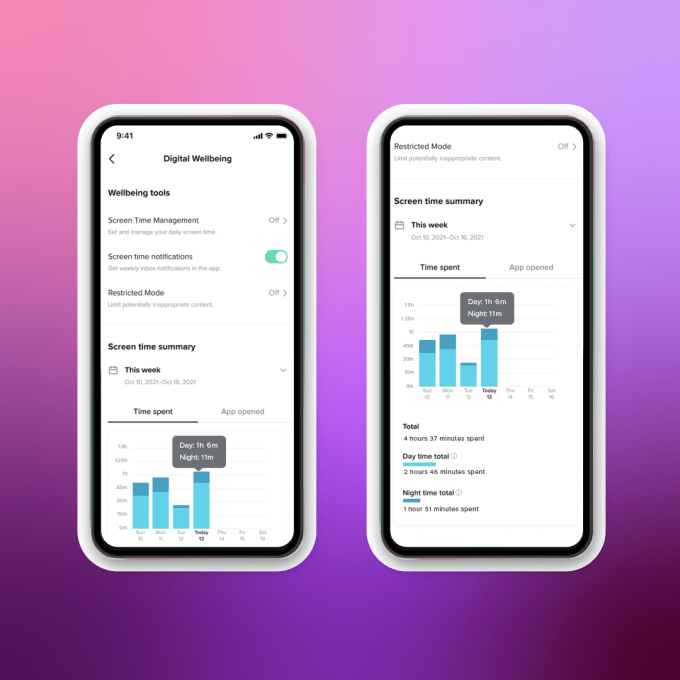 While the new screen time tools are rolling out to global users of any age, TikTok says it’s also introducing new screen time prompts for minor users in between the ages of 13 and 17. Going forward, if a minor has been on the app for more than 100 minutes in a single day, TikTok will remind them of its new screen time limits tool the next time they open the app.

That such a feature even needs to exist suggests that many parents have still not bothered to configure TikTok’s existing parental controls, leaving the company to stand in as the digital parent.

Millennial and Gen X users — today’s parents — may have grown up with technology or used it throughout the majority of their adult lives, but a surprising number still do not use supervise their children’s screen time and digital device usage. A 2021 Kaspersky study found only half of US parents were using parental control apps and only 44% supervised children’s use of devices. In other markets, the adoption of parental controls may be even lower. A 2020/2021 Ofcom study, for instance, suggested that around six in ten UK parents were aware of digital parental controls, but only around a third actually used them. 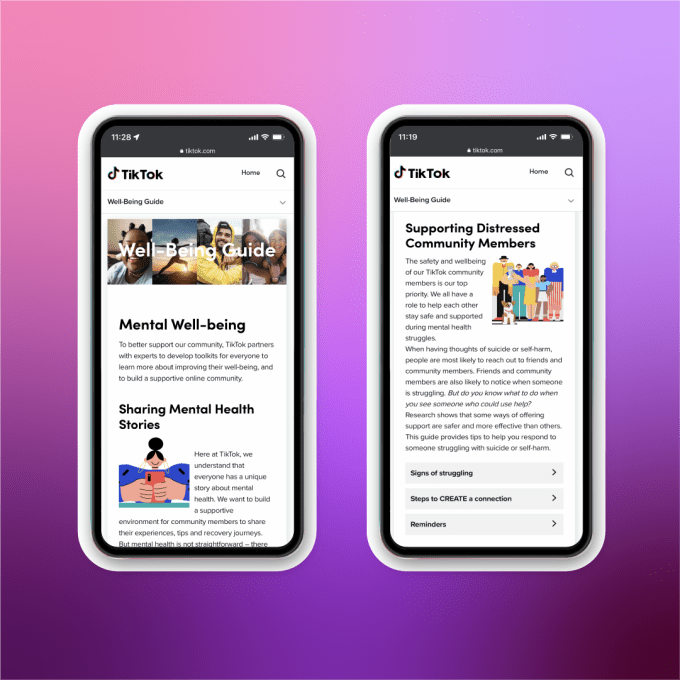 The rollout of new screen time features follows a recent April 2022 investigation by the Wall Street Journal into the impact TikTok is having on children’s brains. The report cited a widely reported scientific study that examined how the app’s algorithm activates the reward centers of the brain — including those associated with addiction. While the study focused on college students and young adults, not kids, it found that about 5.9% of TikTok users may have “significant problematic use.”

Young people have an even harder time with managing their screen time use, The WSJ reported, because their brain’s prefrontal cortex — which targets impulse control and decision-making — isn’t fully developed until age 25.

Arguably, TikTok’s screen time tools, including those for minor children, are more robust than those on rival platforms like Instagram and YouTube due to the granularity of TikTok’s controls. And they’re well ahead of Snapchat, which has yet to launch its own parental controls. But given the now well-documented health impacts of addictive social apps — particularly on children’s brains — it’s expected regulators will soon step in to exert more control over the market so it’s not up to app makers to pick and choose what tools to offer and how they should work.