Donald Trump’s attorney general Bill Barr said his claims the election was stolen were ‘bulls ***’ at the start of the January 6 committee’s first primetime hearing on their investigation into the Capitol riot.

Committee Chairman, Democratic Rep. Bennie Thompson began the hearings by saying: ‘I am from a part of the country where people justified the actions of slavery, the Ku Klux Klan and lynching.

‘I reminded of that dark history as I hear voices today try and justify the actions of the insurrectionists on January 6, 2021’.

‘We swore an oath to defend the Constitution against all enemies, foreign and domestic,’ he added and said the oath was put to the test.

He also criticized Trump for trying to stop the ‘transfer of power’ by comparing words from Abraham Lincoln saying he would hand over power if he lost the election.

Thompson then turned to testimony from Barr filmed during their investigation where the former attorney general said: ‘I’ve had three discussions with the President that I can recall.

‘One was on November 23. One was on December 1, and one was on December 14, and I’ve been through sort of give and take of those discussions. And in that context, I made it clear I did not agree with the idea of ​​saying the election was stolen and putting out this stuff, which I told the President was bulls ***.

‘And, you know, I didn’t want to be a part of it. And that’s one of the reasons that went into deciding to leave when I did what I observed. I think it was on December 1, and you know, how can we not live in a world where the incumbent administration stays in power, based on its view, once supported by specific evidence that the election that there was fraud in the election. ‘

The committee has interviewed more than 1,000 people – including Trump aides and rioters – who they believe were directly or indirectly involved in the Capitol riot 17 months ago. 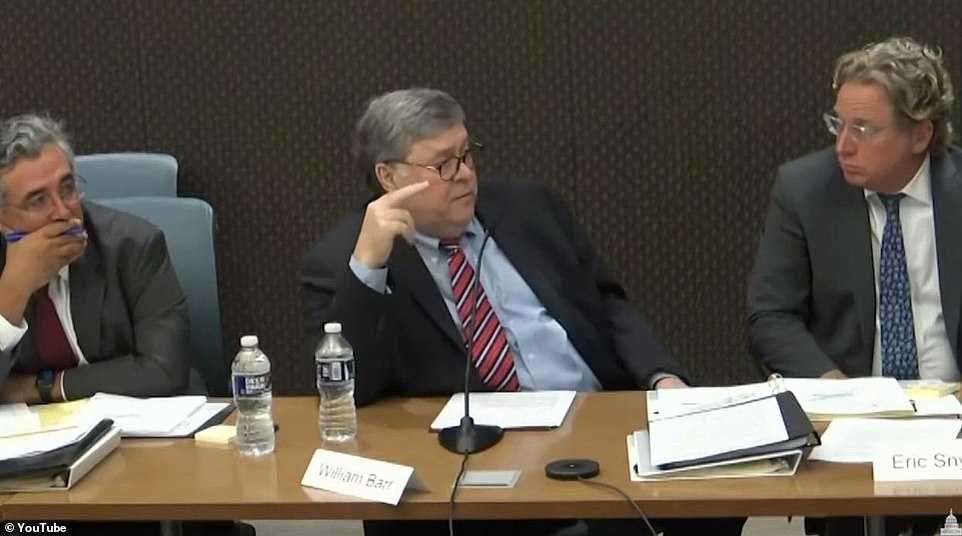 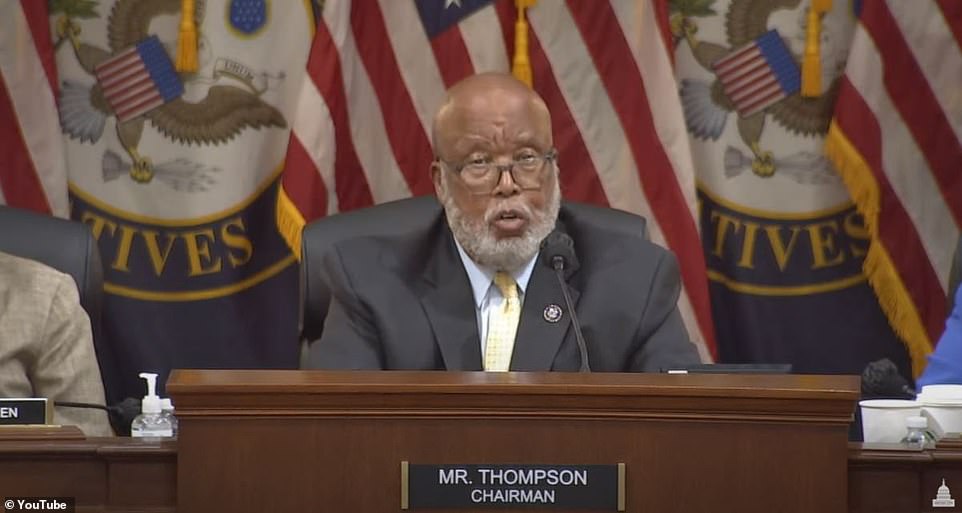 Committee Chairman, Democratic Rep. Bennie Thompson began the hearings by saying: ‘I am from a part of the country where people justified the actions of slavery, the Ku Klux Klan and lynching

Republicans have called the primetime hearing, produced by a former ABC News executive James Goldston, a distraction from scandals plaguing the Biden administration and Democrats including inflation, dire polls, gas prices, crime and the situation at the border.

They also say security failures are also squarely to blame for the riot and have claimed Nancy Pelosi is responsible for those lapses.

Earlier on Thursday, Trump tore into the actions of the committee in a Truth Social post saying January 6 ‘represented the greatest movement in the history of our Country to Make America Great Again’.

‘The Unselect Committee did not spend one minute studying the reason that people went to Washington, DC, in massive numbers, far greater than the Fake News Media is willing to report, or that the Unselects are willing to even mention.’

In a second post, he said: ‘It was about an Election that was Rigged and Stolen, and a Country that was about to go to HELL… & look at our Country now!’

In the next post he bashes the lawmakers on the committee as ‘political Thugs’ who ‘refused to study and report on the massive amount of irrefutable evidence, much of it recently produced, that shows the 2020 Presidential Election was Rigged and Stolen.’

‘They want NOTHING to do with that topic because they can’t win on the facts,’ Trump said.

He accused House Speaker Nancy Pelosi and Washington, DC Mayor Muriel Bowser of rejecting an offer from the White House to send military reinforcements into the city that day.

‘The Unselect Committee has now learned that I, as President, suggested & offered up to 20,000 National Guard, or troops, be deployed in DC because it felt that the crowd was going to be very large,’ Trump wrote in his final of three posts.

‘Crazy Nancy Pelosi turned down the offer, she didn’t like the way it looked. Likewise, the Mayor of DC Had they taken up the offer, there would have been no January 6th. ‘

Speaking at the Summit of the Americas in Los Angeles, President Joe Biden called January 6 a ‘flagrant violation of the Constitution’.

Before a meeting with Canadian Prime Minister Justin Trudeau, he said: ‘One of the things that is going to occupy my country tonight, I suspect, is the first open hearings on January the 6th and as I said when it was occurring and subsequent, I think it was a clear, flagrant violation of the Constitution.

‘I think these guys and women broke the law – tried to turn around the result of an election.

‘And there’s a lot of question of who’s responsible, who’s involved,’ he added. ‘I’m not going to make a judgment on that.

Also on Thursday it was reported that Trump’s Education Secretary Betsy DeVos revealed for the first time that she spoke to Vice President Mike Pence about using the 25th Amendment to remove the president and said January 6 was the ‘last straw’ before she resigned ahead of his last day in office. 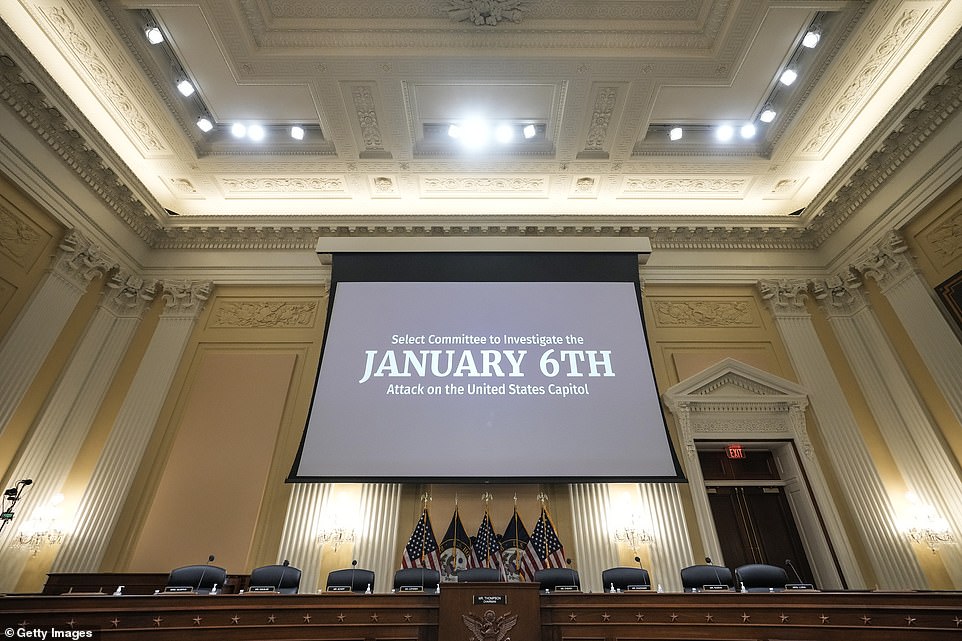 A huge screens sit above the empty chairs where the committee members will sit ahead of the hearing, with the room packed with cameras and reporters 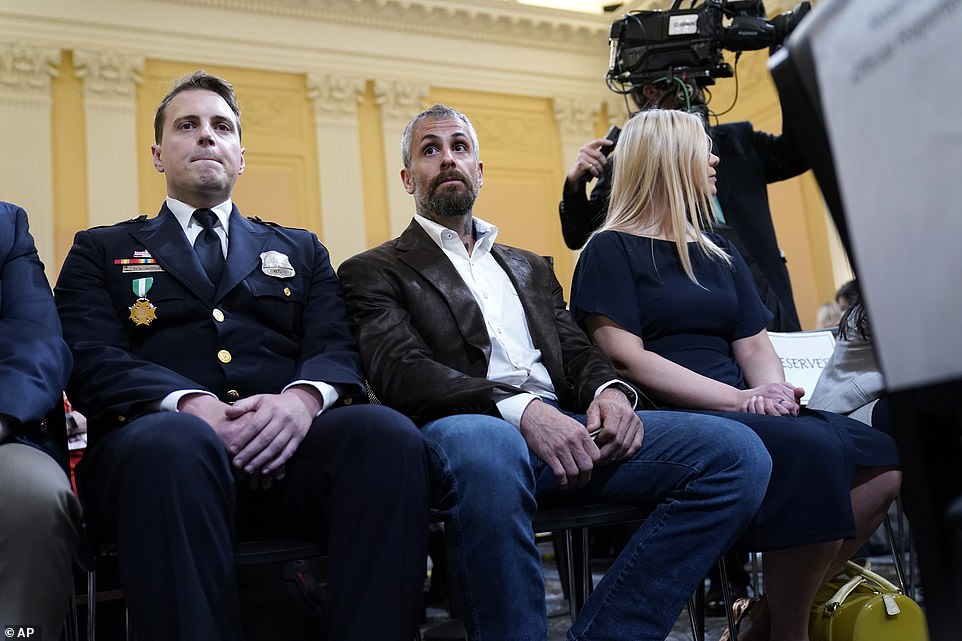 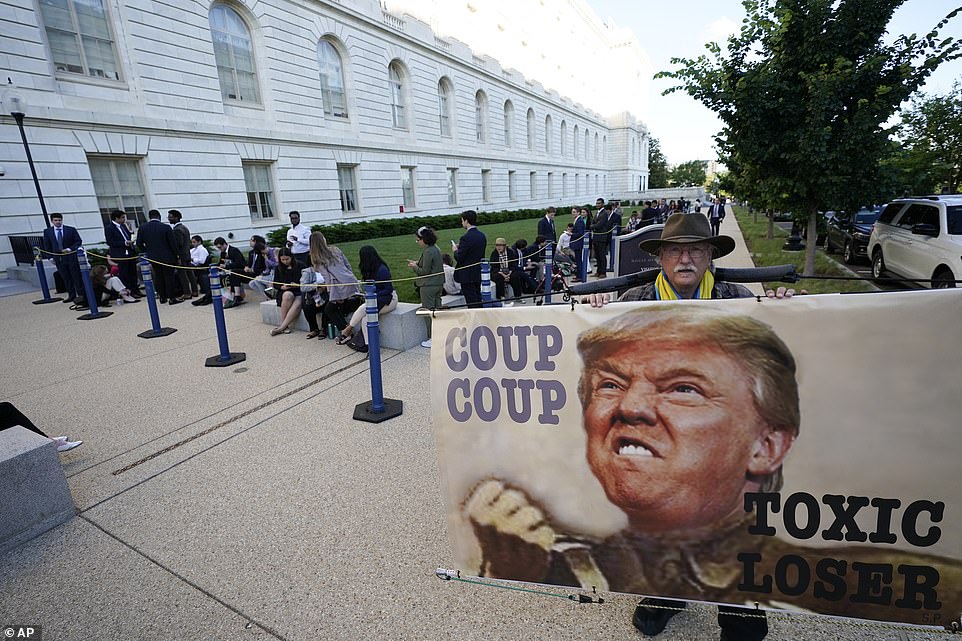 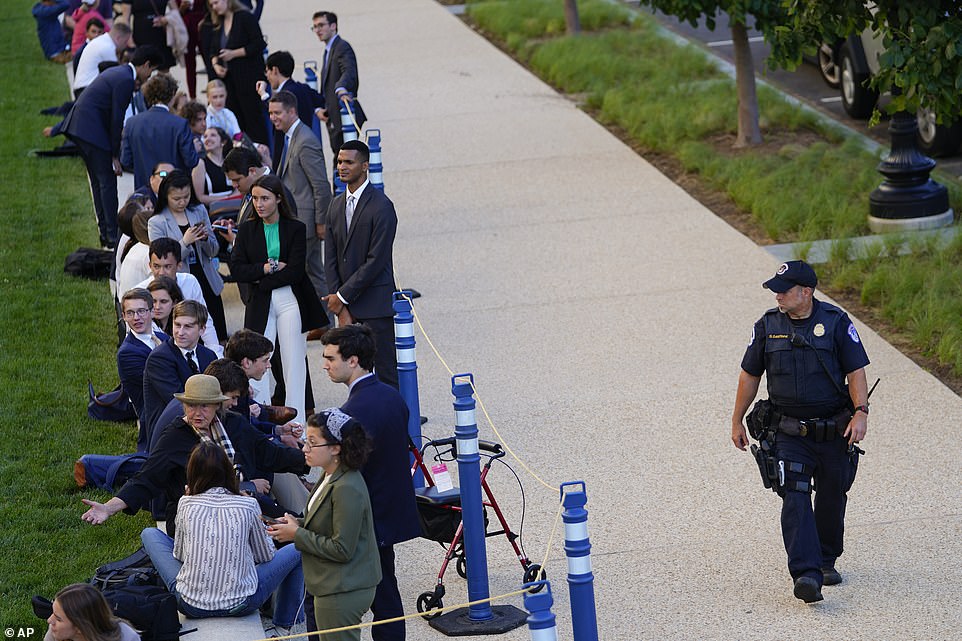