Mexico City-based digital bank Klar has raised $70 million in equity funding at a valuation of $500 million, the startup announced today.

The raise follows a period of hyper-growth for the company. Klar experienced a “7x” year-over-year increase in revenue and 4x bump in transaction volume over the same time period, according to Klar co-founder and CEO Stefan Möller. Also over the past 12 months, Klar added 1.4 million customers and originated over $!00 million worth of loans.

“We’re starting to see the benefits of scale slowly starting to kick in,” Möller told TechCrunch in an interview. “We’ve not only been able to gain traction, but we’re also able to do it more cost effectively and acquire more users organically.” The executive declined to share hard revenue figures or total customers.

General Atlantic doubled down on Klar, leading its latest financing in addition to its $70 million Series B last July. Prosus, Quona, Mouro, IFC, Acrew and Endeavor Catalyst also participated in the round. WTI provided $20 million in venture debt, Möller said. In total, the company has raised over $150 million in equity funding since its 2019 inception.

When Klar originally started, its mission was to become the “Chime of Mexico.” But over time, that mission has evolved. To be fair, it’s tough to compare the Mexican market to that of the US considering that it is dominated by a handful of banks and the number of unbanked is estimated to be about 50% of a population that includes 75 million adults. On top of that, only about 15% have access to formal credit.

“One of the figures that we consider the most relevant with regard to our traction is that 40% of our users are getting access to financial products they historically didn’t have access to, for the first time – through Klar,” Möller said. “So not only is it a big market that we can compete for market share in, but it’s a market that keeps expanding as we’re able to serve different segments better than the legacy banks.”

Today, Klar offers what it describes as a “100% digital, transparent, free and secure alternative to traditional credit and debit services.”

For example, the startup claims that users can open an account online “in five minutes” through its app. No minimum balance is required and users are charged no fees. The company’s card – powered by Mastercard – offers users cash back on all their purchases and allows them to make mobile payments and access buy now, pay later services. Users can get an advance on their salaries through direct deposit.

In the US, many of these things are taken for granted. But in Mexico, it’s a different story.

‘We started three years ago three and a half years ago to build a bank for Mexicans in Mexico, and I think that this is one of the models where there are no question as to whether the addressable market we talked about is large enough, whether the addressable market caps are large enough,” Möller said. “Also, there are comparable institutions that are publicly traded with very generous market capitalizations, so that shows we have a clear path to exits.”

One advantage for Klar, according to Mölleris that its “cost to serve a user” is about 1/20 of what the incumbents pay.

Klar has three sources of revenue: interchange fees, interest and float income, which is money it generates off of users’ deposits since it is allowed to, from a regulatory perspective, “to put that money to work.” While the company is not yet profitable, Möller said there are “very obvious levers” the company can pull in order to achieve profitability. But for now, the company is more focused on growth.

And as for its original mission to be the “Chime of Mexico?” Well, to Möller, Klar can offer something more customized for the Mexican population – a large percentage of which he says have been “left behind.” 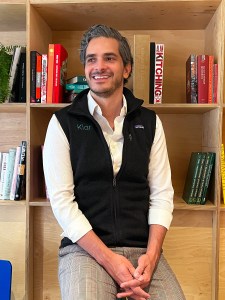 “I tie it back to complacency from the incumbents. We are convinced that there are good financial products out there. They just happened to be reserved for a very few. And I don’t think, for example, that that’s a statement that you can make in the US,” he told TechCrunch. “There, maybe there was less complacency by the incumbents and there was more competition amongst them….But for us, it’s a very obvious opportunity to fix some of the injustices that exist in the market.”

Looking ahead, the startup may explore expanding into adjacent segments. It also is looking to “fortify” its credit offering, of which about 25% of its users are micro entrepreneurs. It’s also looking for M&A opportunities. As for geographic expansion, Klar is squarely focused on Mexico, which in and of itself is huge. It also plans to use its new capital to build more products such as different borrowing ones to complement what Klar currently offers and investment offerings.

Presently, Klar has about 400 employees spread around two main hubs in Mexico and Berlin, where the majority of its engineering and design team is located. The company also has a specialist hub in Boston, where Möller is leveraging “a lot of credit-related talent.

Luis Cervantes, managing director and head of General Atlantic’s Mexico office, told TechCrunch in an interview that overall, the market opportunity in Mexico for digital banks is one of most attractive ones in the world.

“It’s really a combination of our banking system that is very concentrated, very profitable with very high ROA,” Cervantes said. And therefore, the servicing that they offer is expensive relative to the global basis, with weak customer services and weak inclusion into the entire population, and that in turn results in a market where 85% lack access to formal credit.”

That, in his view, leaves opportunity through technology to disrupt the incumbents and “tap into the profit pool,” in addition to increasing access to financial services across the population.

Specifically, though, he admits that his firm “loves” Klar and is impressed with the way Möller took the regulatory aspects of the business “very seriously.”

“He has a very clear roadmap of services and products that he wants to offer..and that can result in what we believe is the largest Mexican digital bank by far with a very superior growth trajectory,” Cervantes added. “The total addressable market includes people who are looking for another banking alternative as well as those who have never before had a bank account.”

My weekly fintech newsletter, The Interchange, launched on May 1! Sign up here to get it in your inbox.