More than a third of Britons say they are worried about being able to pay their rent or mortgage, according to a new study.

Meanwhile, a separate report from one of Britain’s biggest building societies said one in four have tapped their savings to cover basic living expenses.

An Ipsos Mori poll, shared exclusively with This is Money, found that 36 per cent of people were ‘very’ or ‘fairly’ concerned about their ability to pay their rent or mortgage.

Separately, a Yorkshire Building Society study found that four out of ten (39 per cent) had taken money from their savings to cover basic expenses in the last 12 months, taking out an average of £ 455, while a further third (35 per cent ) said they expected to need to do so in the future. 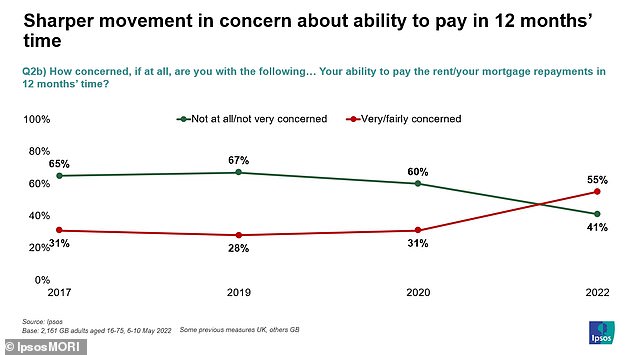 Trouble ahead? Renters and homeowners feel much more concerned about the year ahead than they did in 2020, with 55% worried about meeting housing payments

When asked how confident they were about their ability to pay their mortgage or rent in 12 months’ time, more than half (55 per cent) said they were very or fairly concerned.

This was a huge jump from the 31 per cent who gave the same answer in May 2020 – after the start of the pandemic, but before the cost of living crisis.

The proportion of those worried about paying their housing costs had jumped from 30 per cent at the same time in 2020.

Those who rent their homes were more likely to be worried about paying in the immediate term.

According to Ipsos, 54 per cent said they were concerned right now, going up to 59 per cent when asked about what would happen in a year’s time.

This was compared to 14 per cent of all homeowners, and 39 per cent of those with mortgages specifically.

However, when asked about whether they would be concerned about meeting their payments in a year’s time, 47 per cent of mortgaged homeowners said they would be very or fairly worried.

Both rents and mortgage rates are on the rise, combining with hikes in the price of other essentials such as food, energy bills and fuel to put household budgets under pressure. 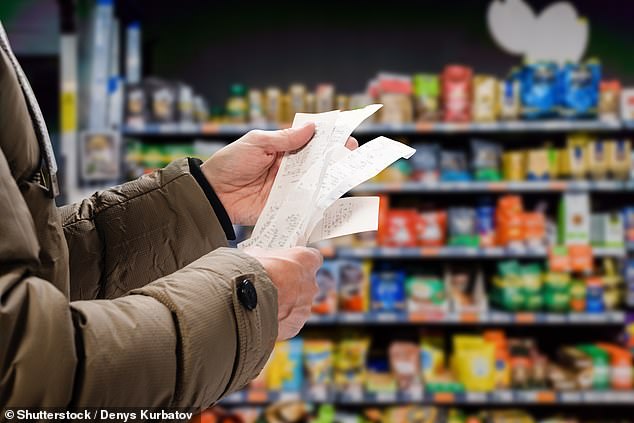 Cost of living crisis: Mortgages and rents are both rising, which – along with hikes in the cost of food, energy and petrol – is stretching household budgets

The average two-year fixed rate mortgage – across all loan-to-value bands – has breached 3 per cent for the first time in seven years in May, according to data from Moneyfacts.

Have you had to tap your savings more than usual to pay bills this year?

The last time average two-year fixed deals were higher was in March 2015, meaning homeowners could face monthly bill shocks when they come to remortgage.

Meanwhile, tenants in the UK are now paying an average of £ 1,088 per month in rent, Rightmove said in April, in what is being described as the most competitive market ever recorded.

Renters usually spend a larger share of their income on housing costs, and are therefore often hit harder by price rises. 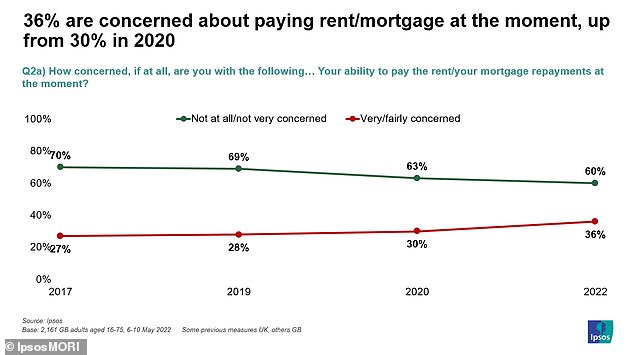 Current concerns: Ipsos’ survey found that more than a third of people were fairly or very worried about rent or mortgage payments in May 2022 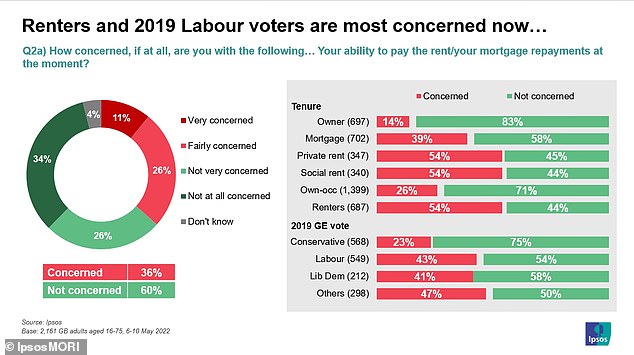 Currently, 39% of mortgaged homeowners are worried about making their monthly payments, compared to 54% of renters 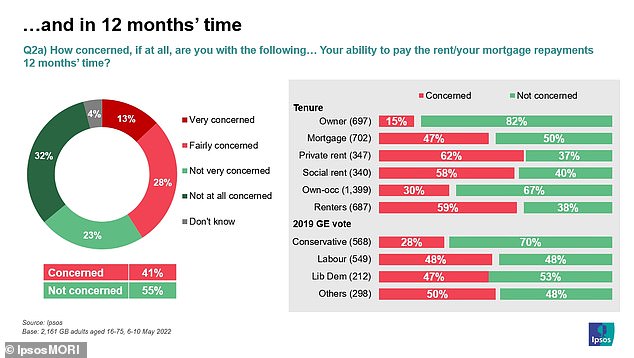 When asked about making payments in 12 months’ time, there was a notable uptick in concerned homeowners, reaching 47%

In a separate Ipsos survey, one in 10 Britons claimed they would struggle to pay an increase in their rent or mortgage repayments, with the same proportion already regularly missing credit payments.

Ben Marshall, research director at Ipsos, said: ‘So far, the cost-of-living crisis has focused on increases in food and energy prices, but increases in rents and mortgage repayments could see an additional squeeze on households. 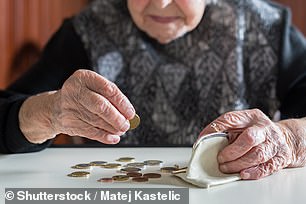 In another Ipsos survey, one in 10 Britons said they would struggle to pay an increase in their rent or mortgage repayments

‘That private renters are more worried about affordability than mortgage-holders is neither new nor surprising – they pay a considerably larger share of their income on housing than other tenures – but the level of concern among the wider public is.

‘Before the pandemic, 31 per cent of people said they were very or fairly worried about paying for housing in 12 months’ time, but the proportion has grown to 55 per cent.’

Splitting the responses by the respondents’ last general election vote, Ipsos found that 23 per cent of Conservative voters were worried about housing costs in the immediate term, compared to 43 per cent of Labor voters.

Based on the next 12 months, that increased to 28 per cent and 48 per cent respectively.

Separate research by Yorkshire Building Society has reported that more than two thirds (67 per cent) of UK adults are concerned about the impact of the cost of living crisis in general, while almost half (46 per cent) said they had seen a deterioration in their mental health as a result.

Three quarters (75 per cent) of people said they expected their household running costs to increase in the coming months, with two in five (41 per cent) expecting them to rise by between £ 101 and £ 500.

People also reported having to dip into their savings to cover basic living expenses. Four out of ten (39 per cent) had done so in the last 12 months, taking out an average of £ 455, while a further third (35 per cent) said they expected to need to do so in the future.

But nearly one in five (17 per cent) of households have nothing (£ 0) in cash savings and therefore could struggle to absorb further increases to their cost of living.

Stephen White, interim chief executive of Yorkshire Building Society, said: ‘Much has been written about the devastating financial impact of the ongoing cost of living crisis on British households, with a number of measures announced by the Government in an effort to combat rising fuel and utility costs.

‘However, what we have been able to reveal today is the shocking, severe impact the crisis is having on our nation’s mental health – with almost half of all adults already reporting a deterioration in their mental state as a direct result of rising prices and inflation . ‘